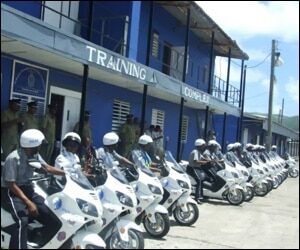 The safety and security of the citizens of St Kitts and Nevis have been a major focus for the Government of National Unity as it works feverishly to ensure that citizens and residents enjoy a free and safe society to live, work, and play with the implementation of a number of initiatives.

One such initiative is the Royal St. Christopher and Nevis Police Force (RSCNPF) Six Point Plan which was launched in July 2015. The plan is geared towards crime prevention, intelligence-led policing, targeted operations, community engagement, collaboration strategies and continuous improvements and administration.

During his New Years’ Day Address on Friday, January 01, 2016, Prime Minister and Minister of National Security, Dr. the Honourable Timothy Harris, said that although the homicide rate is still high, overall major crimes are down.

“Crime and criminal behavior must be reduced and stopped wherever possible,” said Prime Minister Harris.  “It is for this reason that the Ministry of National Security would have received in the 2016 Recurrent Budget the largest ever allocation to facilitate ongoing investment in training, re-tooling, science and technological investment, and crime-fighting applications.  Government has also taken the step to increase risk pay for security forces, something that was overdue for more than 20 years.”

The national security minister pointed out changes that would be made to the security forces in 2016.

“During the first quarter of 2016, determinations will be made regarding new leadership in the Police Force, including installation of a new High Command for our security forces,” he said.  “Whoever lead s the Police force ““ whether he or she is appointed or acting in the post ““ must embrace the synergies, the development of intelligence, the consistent application of investigative techniques and science.  Reliable reporting and record-keeping are also paramount in bringing the right persons to justice and obtaining appropriate convictions and sentencing.”

Additionally, the Ministry of Justice and Legal Affairs is working to reduce backlogs and poor prosecutions in the court.  Efforts are also being made to add a second high court judge, create a new courtroom, and improve prosecution procedures in order to have a higher success rate when matters are brought to trial.