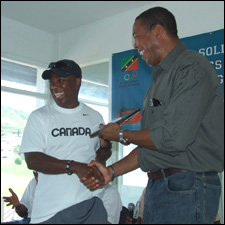 Desai Williams, a national of St. Kitts and Nevis, who resides and works in Canada, has been hailed as a true “son of the soil” by the Minister of Sports Honourable Glenn Phillip for his efforts in bridging the gap between the two countries.

In 2008, Williams brought a contingent of athletes to use the facilities of the newly constructed Silver Jubilee Athletic Stadium for training. Since then, the visits have become a regular feature often taking place at least twice per year.

A group of 11 athletes along with support staff and coaches are wrapping their first visit of 2012. Last month, 18 athletes, plus staff visited.

“My vision is not just to come here once or twice but maybe three or four times of the year for warm weather training,” Mr. Williams stated. “The beauty about it is the weather. It’s great. The facility is great, plus the people are very good hosts, and we feel comfortable here. We have a very good time, and you can’t beat that.”

Senior officials of the governing body of track and field – Athletics Canada, have also embraced the twin-island Federation as one of their preferred venues for training outside of their country. Last Saturday, they, along with partners Own the Podium, and Canadian Sports Center Ontario, donated gym equipment, including an Olympic platform, two squat machines, a universal machine and dumbbells totaling more than 2,000 lbs. An ice tub was also donated.

Mr. Williams explained that athletes using the stadium no longer have to go off compound to access gym facilities.

“It’s a one stop shop in a sense that you come here to train, do your recovery, lift weights and do everything here,” he noted. “Now the SKNAAA (St. Kitts-Nevis Amateur Athletic Association), and of course the sports tourism [officials] can actually sell the facility to other countries and say, hey we have a state-of-the-art facility, not just a track, but we can encompass all the weights and whatever training any team out there may need.”

In accepting the equipment, Minister Phillip told Desai, “We can see that today’s ceremony has really demonstrated your hard work, your willingness to see the land of your birth and your people here succeed. Thank you!”