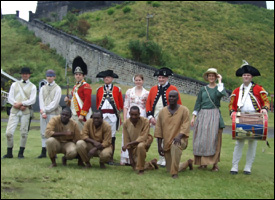 As activities to celebrate the Diamond Jubilee of Her Majesty Queen Elizabeth II near completion with the approaching climax in June, Manager of Special Projects at the St. Kitts Tourism Authority Randolph Hamilton has stated that he believes the Federation has taken the opportunity to ensure maximum economic benefits for the tourism sector.

Concerning the recent re-enactment of significant historical events at Brimstone Hill Fortress National Park and Montpelier Plantation in Nevis, Mr Hamilton said the re-enactors from the British Brigade Inc. have returned rave reviews of their recent visit to the Federation.

Commenting on the experience, leader of the re-enactor troupe Don Beale, said the extent to which the Government and people of St. Kitts and Nevis had gone to make their stay a pleasant and enjoyable one was unprecedented. From arrival to departure, Mr. Beale said they felt very welcomed and were “bowled over” by the show of generosity, support and goodwill.

An island tour aboard the St. Kitts Scenic Railway; a reception that featured local folklore performances and a spectacular, first ever, re-enactment performance depicting the enslaved Africans capturing high ranking French officers at Government House, were cited as special features.

The actual friendliness and warmth of Kittitians and Nevisians as they dramatized the re-enactments were all noted as being phenomenal. Special commendation went out to Steve Hites, owner of the St. Kitts Scenic Railway, who put on the complimentary tour for the re-enactors and personally accompanied them to ensure their comfort and enjoyment.  Her Majesty’s representative, His Excellency the Governor General, Sir Cuthbert Sebastian interacted with members of the British Brigade before the tour started.

Mr. Beale said they were already initiating plans to return to the Federation in larger numbers in the near future.

The Tourism Special Projects Manager Randolph Hamilton re-affirmed the commitment of the Tourism Authority and Ministry of Tourism and International Transport to ensuring maintenance of the quality of the St. Kitts Brand and that people who come here have an unforgettable experience.

He expressed to Mr. Beale the fact that there had been an overwhelming show of gratitude and positive feedback from residents as well as cruise and stay over visitors regarding the quality of the re-enactments and the experience of going back in time.

Mr Hamilton also revealed plans for the inclusion of the official launch of the “Amazing Grace Experience,” another soon to be released component of the Tourism experience in St. Kitts and Nevis, as one of the events to mark the 60 year reign of Queen Elizabeth II.