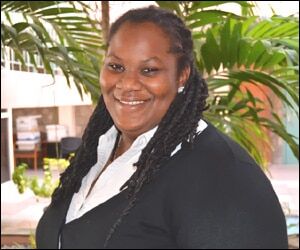 A symposium scheduled for Tuesday, April 05, is one of the Key activities of this year’s Diplomatic Week which is being held under the theme “Forging New Partnerships and Strengthening Networks for Sustainable Growth and Economic Development”.

Asha DeSuza, Foreign Service Officer in the Ministry of Foreign Affairs, explained the objective of the symposium.

“The aim of the symposium is to create awareness and a platform for dialogue about the 2030 Agenda for Sustainable Development and Climate Change,” said Miss DeSuza, while adding that the symposium is also geared towards heightening the awareness of the effects of climate change on the environment, economy and society.

She made specific mention of the theme for the symposium and noted that it is relevant to the current changing weather conditions in the region and worldwide.

“Our theme, the 2030 Agenda for Sustainable Development: Demystifying Climate Change was chosen because it suits the objectives of the symposium,” said the Foreign Service Officer. “The Ministry is aware of the general perception that climate change is a technical concept that is generally disconnected from the layman in society. We want to demystify or change that perception and to demonstrate that climate change is not such an abstract concept in fact, since it directly affects each citizen in one way or another. The current water drought is evidence of this dynamic.”

Ms. DeSuza stated that a symposium is an avenue that encourages participation and dialogue between all relevant stakeholders.  “For the Ministry of Foreign Affairs and Aviation, it is a launching pad to heighten awareness and understanding about climate change and its extensive impacts,” she said.

All are encouraged to attend the symposium as it is designed for everyone including climate change stakeholders, young people, students and everyone who are engaged in the pursuit of the development agenda for the Federation and by extension the region.