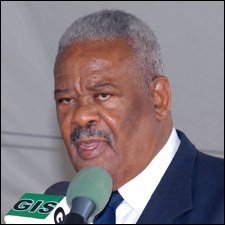 So says British Virgin Islands Premier the Hon. Ralph T. O’Neal in a message congratulating the St. Kitts and Nevis Prime Minister on securing a fourth term in office in Monday’s general elections.

In a congratulatory letter dispatched to Dr. Douglas Tuesday, Premier O’Neal told Prime Minister Douglas that his St. Kitts-Nevis Labour Party’s unprecedented win at the polls of an historic fourth consecutive term is laudable given the political winds of change in the Caribbean which have adversely affected long serving leaders and parties.

He added, “As I closely followed the media coverage leading up to Monday’s general elections, I realised that your record of achievement was a tough fight for any opponent. Your determination and strong resolve to continue to work on behalf of the people of St. Kitts and Nevis were evident, and the voters have reaffirmed their confidence in your leadership.”

Premier O’Neal, who visited St. Kitts recently to look at the National Housing Corporation (NHC) home ownership programme also noted that Dr. Douglas has demonstrated “strong interest and concern” for the Organisation of Eastern Caribbean States (OECS), the Caribbean Community (CARICOM) and the Caribbean in general and he expressed certainty that “this will continue during the fourth consecutive term of your Government.”

Extending best wishes to the victorious Prime Minister for another successful term, Premier O’Neal said gave his assurance of the support of the BVI Government and hoped to offer his personal congratulations to they next meet at an OECS Heads of Government meeting.”

The Governments of the Virgin Islands and the St. Kitts and Nevis have enjoyed years of cordial relations as members of regional organisations including the OECS.