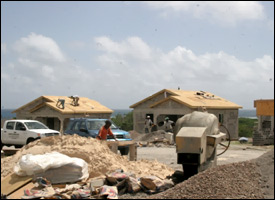 Over 40 prospective Nevis homeowners have received approval for construction of their own homes under the Buildings Material Incentive Program (BMIP) announced by Prime Minister, the RT. Hon. Dr. Denzil Douglas in 2011, and supported and encouraged by Premier and Leader of the Nevis Reformation Party, the Hon. Joseph Parry.

Forty two applications have been approved as of mid-April, and there are several other applications to be approved, said Mr. Edroy Byron of the Nevis Ministry of Finance.

Procedure for Citizens to utilize the BMIP:

Obtain and complete the application for duty-free concessions on building materials.

Submit the completed form to the Ministry of Finance along with a certified copy of the commencement certificate issued by the Physical Planning Department, and a bill of quantities issued by the builder.

The application will take three to five working days to be processed, once the application is approved a letter of approval and a copy will be sent to the Customs and Excise Department.

The concession applies to building materials purchased locally, or imported by successful applicants.

All applications to benefit from the BMIP should be made and all purchased/imports completed by December 31, 2012.