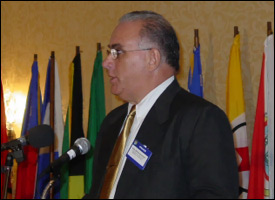 Former Minister of National Security, Immigration and Labour, Hon. Dwyer Astaphan has been praised for his outstanding service as a Cabinet Minister for the past 13 years.

“I am certain that the entire nation would join with me in thanking Minister Astaphan for his outstanding service and for the diligence, passion, commitment and capacity for hard work that he amply demonstrated during his 13-year period in office,” said Prime Minister Douglas in an address to the nation on Friday morning.

The Hon. Dwyer Astaphan came to office in 1995 as part of a new Labour Administration, at a critical juncture in the history when St. Kitts and Nevis was in dire need of leadership, direction and social change.

“He brought his own unique and effective style to bear on the many developmental challenges faced by our nation during his tenure in office, and this contributed in a significant way to many of the achievements of the very competent and successful team of Ministers, policy-makers and administrators that I lead as Prime Minister of our proud nation,” said Prime Minister Douglas.

He praised Mr. Astaphan for his “immense contribution to the development of the Tourism Sector, the management of National Security under very trying circumstances, and the overall governance of the Federation as a member of the Cabinet, will continue to bear fruits for the people of this country for many decades.”

Prime Minister Douglas said he and his Cabinet colleagues have the assurance of the Hon. Dwyer Astaphan that he will “continue to provide effective and committed service to his constituents as their representative in the National Assembly and he will make available to the Government his time, talents and outstanding intellect for the continued advancement of the Federation of St. Kitts and Nevis.”

Last month Prime Minister Douglas at his monthly press conference informed the nation of the decision of the Hon. Dwyer Astaphan to resign from the Cabinet of the Government of St. Kitts and Nevis and from the position of Minister of National Security, Immigration and Labour.

The Hon. Dwyer Astaphan, in a subsequent statement to the National Assembly, advised Parliamentarians and the nation as a whole of his intention to give up his Cabinet portfolio with effect from August 1, 2008.