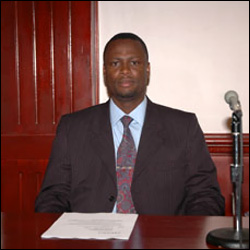 The Ministry of Education is moving forward in its quest to form new partnerships and reaffirm up support from existing associates as it expands the scope of technical and educational programmes in the curricula.

Minister of Education, Honourable Nigel Carty stated that there has been an increased number of private sector agencies and individuals who have stepped forward to assist the Ministry in the “difficult yet important task of educating our young people.”

AVEC Director Clyde Christopher told SKNIS that he is extremely grateful for the continued support of Digicel to the technical and vocational institution. He added that approximately half of the centre’s student population is interested in business studies and the new PCs will allow greater admission numbers to the programme as well as enhanced content delivery.

Minister Carty stressed that it was critical for public and private sector relationships to be enhanced to ensure that students are provided with additional learning tools that adequately prepare them to meet the demands of the working world.

“It is very important that we have support from the private sector – We cannot do it alone,” he stated. “I want to say to … Digicel and to others who have supported us in the past that your contribution is not only timely, but it is critical in helping us to achieve our goals and objectives in education.”

The education minister also saluted Director Christopher for his leadership of the institution and his ongoing efforts to raise the level of standards at AVEC.