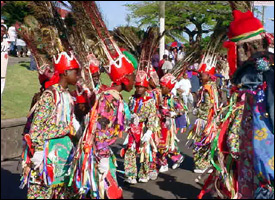 Each calypsonian will sing two selections on Friday night. The competition begins at 8:00 p.m. at Festival Village on the Saddlers Primary School grounds. The Grand Masters will play for the calypsonians.

The 12th Annual Saddle Fiesta kicks off this evening Thursday with the Official Opening Ceremony at the Saddlers Primary School Grounds.

Spokesman for the Saddle Fiesta Committee, Ms. Clarissa Langley said Prime Minister and Parliamentary Representative, Hon. Dr. Denzil L. Douglas will give brief remarks and officially declare the community festival. Village role model, Tamara Rubaine, an employee of the St. Kitts-Nevis-Anguilla National Bank is down to give the feature address.

Other events planned are Family (Community) Fun Day at the Saddlers Primary School Grounds at 1:00 P.M. and the Ram Tight Dance at the Railway Club on Saturday 16th August.

On Sunday 17th August a church worship begins at 7:00 A.M at the St. John’s Anglican Church, followed by a Beach Clean Up at Lynches Bay and the Bikini Bash at 5:00 p/m. also at Lynches.

Monday 18th August at 8:00 P.M. is dubbed Proclaiming the Gospel ““ a Tribute to the late Delsa Edmeade, who died tragically in a traffic accident in October 2005

A Community Workshop is planned at the Saddlers Primary School on Tuesday 19th August. Elderly Appreciation Day will be on Wednesday 20th at 10:00 A.M. with an island tour and luncheon at Frigate Bay.

The Prize Giving Ceremony is planned on Saturday 30th August at 8:00 P.M.