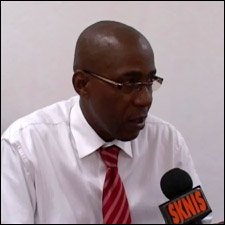 Energy Ministers from Latin America and the Caribbean are in conference at the St. Kitts Marriott Resort as a precursor for tomorrow’s (Friday) 6th PetroCaribe Summit.

Today’s Ministerial Meeting sees contributions from representatives of the 18-member countries that are a part of the PetroCaribe Agreement, which is a financial arrangement that allows participating states to buy oil from Venezuela at market value. However, only a percentage of the imported fuel is paid upfront; the remainder can be paid over a 25 year period with a one percent interest charge. The monies deferred from the initiative are used to fund various social programmes.

Minister responsible for Energy, the Honourable Dr. Earl Asim Martin chairs today’s session. He told SKNIS that delegates will review current quotas of fuel to ensure it is on par with developmental needs.  “We will also look at the impact of the Agreement on the economic and social development of our respective countries and see how we can improve on the original agreement that we signed four years ago in Venezuela,” he added.

Minister Martin further noted that discussions over the next two-days will take into account the current global economic downturn and how countries can gain relief based on the conditions of the PetroCaribe Agreement.

Friday’s Summit, to be co-chaired by host, Prime Minister the Honourable Dr. Denzil Douglas and President of the Bolivarian Republic, His Excellency Hugo ChÃ¡vez, will see Heads of States ratify agreements from the Ministerial Meeting, and engage in other high level discussions.

Minister Martin disclosed that St. Kitts and Nevis has benefited significantly from the PetroCaribe Agreement, describing the arrangement as “quite helpful” in assisting the twin-island Federation cope with the global economic and financial crisis.

On Wednesday, media from Venezuela got a first hand account of some social projects which have resulted from the deferred payment system. Minister of Housing, the Honourable Cedric Liburd led tours to PetroCaribe-assisted housing projects in Mansion’s Phillip’s and Conaree.