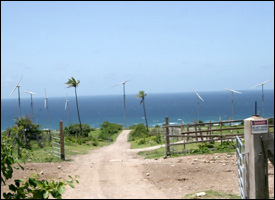 North Star recently disclosed that US$16.5 million has been committed by the United States Overseas Private Investment Corporation (OPIC) to fund the construction of Phase I of the wind far at Belle Vue, St. Kitts.

“The contract that was previously signed with North Star’s covers a 20-year period. This contract I have been informed by the Ministry of Energy is presently under review by the Ministry of Legal Affairs and by our consultant in the Department of Energy. When the review is completed we shall further update,” the Prime Minister told reporters.

He said should conditions support such a course of action, the initial 5.4 MW capacity can, at a later date, be expanded to 20 MW.

“Initiatives in renewable energy, whether they are geothermal-based, wind or solar-based are all important developments for the Federation,” said Dr. Douglas, adding:

“Fossil fuel reserves are finite.  Oil prices on the world market can be volatile.  And oil supplies are determined by forces beyond our control.”

“Wind can be converted into energy in an efficient and cost-effective manner. We must develop them.  And this is what we are doing.  Renewable energy will constitute an important component of this country’s forward movement economically.  And North Star will be an important source of renewable energy,” said Dr. Douglas.