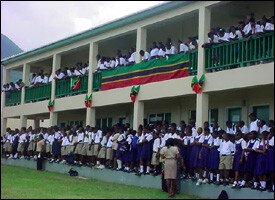 A Sandy Pointer residing overseas has commended St. Kitts and Nevis Prime Minister Hon. Dr. Denzil L. Douglas for developing Sandy Point, although his governing Labour Party is not representing the area in the National Assembly.

“I was home recently and I must express my thanks to you and your government for not discriminating against the people of Sandy Point although the Representative is not from your party,” wrote the individual in an email sent in during Tuesday’s “Ask the Prime Minister” programme.

“I must express my pride in seeing that a lot has taken place in Sandy Point. The new Pogson Hospital, the new Community Centre, new and paved roads, the new Day Care Centre, scores of homes and land given to Sandy Pointers of all political affiliations and I must not forget the improvement and additional classrooms at my alma mater – the Sandy Point High School,” said the writer.

“Because the Parliamentary Representative, Hon. Shawn Richards is not part of the Labour Administration, Sandy Point will not be ignored,” said Prime Minister Douglas on his weekly radio programme on ZIZ Radio and syndicated on Kyss FM, Sugar City Roc and Radio One.