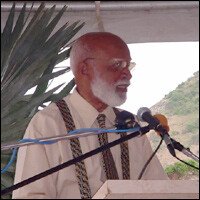 St. Kitts and Nevis will be represented by Sir Edmund and Lady Lawrence at the 13th Inauguration Ceremony of the President of the Republic of China (Taiwan), His Excellency Ma Ying-jeou on Sunday.

Sir Edmund is standing in for St. Kitts and Nevis’ Prime Minister the Right Hon. Dr. Denzil L. Douglas, who is unable to attend due to his governing St. Kitts-Nevis Labour Party’s 80th Annual Conference on Sunday 20th May, the same day of the Presidential Inauguration.

Sir Edmund and Lady Lawrence will be joined by St. Kitts and Nevis’ Resident Ambassador in Taipei, Her Excellency Jasmine Huggins at the celebrations which will be attended by scores of dignitaries from around the world.

President Ma Ying-jeou’s inauguration ceremony on May 20 will be streamed live on the Internet.

Internet users can watch the swearing-in ceremony and Ma’s inaugural address from 9:00-9:50 a.m. on various government websites in Mandarin and English, his office in Taipei said.

An online album was posted Wednesday to provide information about Ma, who will be sworn in for a second term, and new Vice President Wu Den-yih. The album also included details of the inauguration ceremony and the guest list.

Ma and Wu of the Kuomintang (KMT) will be sworn in as the 3rd popularly elected president and vice president of the Republic of China (ROC).

Lee Teng-hui of the KMT was the first president elected through direct popular vote in 1996;  Chen Shui-bian of the Democratic Progressive Party was the second, in 2000.

The Central Bank of the Republic of China (Taiwan) will issue commemorative coins celebrating the inauguration of President Ma Ying-jeou, who will begin the country’s 13th presidential term on May 20.