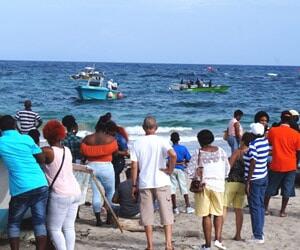 Permanent Secretary in the Ministry of Agriculture and Fisheries on Nevis Eric Evelyn, says the growing interest in the annual fishing tournament hosted by the Indian Castle Fisherfolk Association underscores the need for fishers in St. Kitts and Nevis to conserve and protect the fishing resource.

Evelyn, made the comment when he spoke with the Department of Information on May 13, 2016 following the 3rd annual tournament held on Labour Day. The community-based tournament forms part of the Department of Agriculture’s Agriculture Awareness Month of activities during May.  This year’s theme is “Adapting to Climate Change to achieve greater Food Security.”

“We have heard so much about our reefs in St. Kitts and Nevis and throughout the region, how they are being depleted and the condition of the reefs.

“We have heard about the depletion of the fish stock in our waters and it is telling our fishermen that we need to take stock of what we are doing, how we are catching, our techniques that we are using in an effort to ensure that fish is there for the future generations and the importance of conserving the fish stock in our waters well,” he said.

However, the Permanent Secretary commended the association for their ability to organize the event independent of assistance from the Nevis Island Administration (NIA).

“So I must tip my hat to the members of the Indian Castle Fisherfolk Association for such a tremendous effort,” he said.

According to Evelyn, the tournament initially targeted fishers from the Indian Castle area but over the years opened up to fishers from other landing sites  among them Charlestown, Long Hall and Oualie and plans are afoot for involving fishers from St. Kitts in 2017. He said the move to include more fishers augurs well for the tournament’s future.

The Permanent Secretary said the 2016 tournament saw an increase in the level of participation, participant’s enthusiasm and more attractive prizes were offered. There was also an increase in the number of fish caught, greater patronage, more fish vendors, a greater number of persons purchasing fish for consumption and more patronage of the event.

Evelyn expressed the view that the increased demand for fresh fish suggests that persons are becoming more health conscious and are willing to pay whatever the cost is for fish.