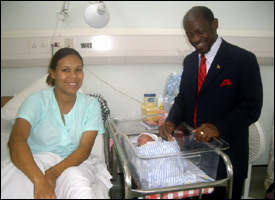 There were no Independence Baby 2008, but three days earlier National Heroes Day (September 16th), five boys and one girl were born at the Maternity Ward at the Joseph N. France General Hospital.

St. Kitts and Nevis Prime Minister Hon. Dr. Denzil L. Douglas, who went to the hospital following the Ceremonial Parade at the Football Stadium at Warner Park, was disappointed there was no Independence Baby when he visited and had hoped that by the end of the day there would have been at least one.

Dr. Douglas, who was greeted and escorted by Assistant Nurse Manager, Sis. Janet Williams, used the opportunity to congratulate five of the new mothers who had given birth on National Heroes Day and were still hospitalised.

Prime Minister Douglas made the announcement when he gave the Toast to the armed and unarmed units at Camp Springfield.

“Would you believe that as productive a people that we are, and as fertile that our women here in St. Kitts and Nevis, not even one baby has been born as yet. Would you believe that? Not even one has been born as yet for Independence. There were three who I believe can deliver, and this morning I begged them for God sake deliver because I want an Independence baby on the 25th Anniversary.

“Even though we have not yet had any Independence babies or Independence baby, we have had six of them born on National Heroes Day. Six Heroes have been born on the 16th and today I want you to join with me in celebrating the National Heroes Day babies and their parents. Let us drink again to the health and strength of these young babies”¦and also those of our country who are the future leaders of tomorrow and who are babes today,” said Prime Minister Douglas.

He expressed delight when he presented the 1983 Independence baby, Miss Kaya Archibald of Cayon, who was born on September 19, 1983. “She has grown into a strong, tall and truly Kittitian-Nevisian woman. Natural beauty abounds in this country,” said Dr. Douglas, to the applause of the large gathering.