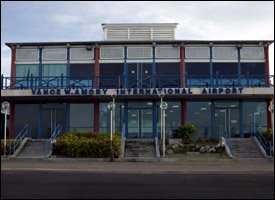 Premier of Nevis and Minister of Tourism, the Hon. Joseph Parry addressed the nation on Wednesday October 22nd, to inform the general public of the new airline schedule for Nevis.

During the past few months, Nevis has been facing difficulties with two airline carriers, the American Airline branch of American Eagle and the regional airline Carib Aviation. The matter with American Eagle has been centered on the challenges that the company has faced with their hub in Puerto Rico and with the decision that American Eagle has made to take most of their business to Miami.  American Eagle has had to reorganize; and in doing so the two daily flights to Nevis were affected.

From December until early January, Nevis will have two daily flights, including an overnight flight. However, for most of the season the island will only have one flight per day.

This new airline scheduling will affect the ease of entry into and out of Nevis towards Puerto Rico.  However, the Nevis Tourism Authority will continue to negotiate with American Airlines, with the objective that overtime the situation will improve.

LIAT will be making daily flights into Nevis with connections to Antigua, St. Vincent, Trinidad, Grenada, Barbados and other Caribbean destinations.  Those same flights will also facilitate connections with British Airways and Virgin Atlantic.

Premier Parry has declared that the Nevis Tourism Authority will continue its negotiations with American Eagle, as Nevis continues to experience challenges with connections into the United States. However, he stated there will be a number of connections into the United States via St. Maarten, Antigua and St. Kitts.  He projects a bright outlook for future relationships with the airline industry and maintains that the persistence and commitment of the NTA staff will redound to great benefits for the island of Nevis.