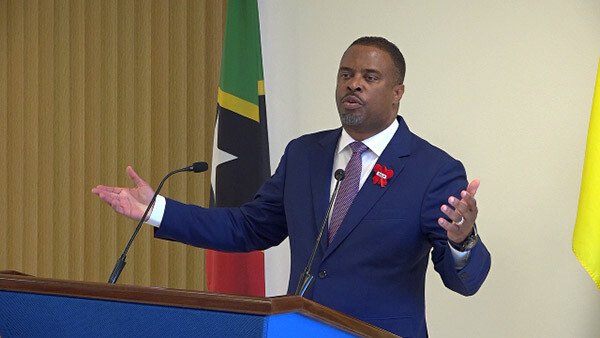 Hon. Mark Brantley, Premier of Nevis and Minister of Tourism in the Nevis Island Administration (NIA), says though the four-month closure of the Four Seasons Resort, Nevis, for major upgrades has been a difficult period, he is looking forward to the financial returns from the anticipated high occupancy during its peak season and new hotel rates will bring to the workers there and island’s coffers.

Mr. Brantley, who is also the Minister of Finance, made the comment at his monthly press conference on November 27, 2019, while publicly commending the resort’s ownership, management and staff.

“Their occupancy is very high for the Thanksgiving Season, and they expect that occupancy is going to move from where it is now to 100 percent, during what they call the festive season. That is mid-December to mid-January.  The Four Seasons Resort rates in particular are very impressive, let me say that the rates have gone up dramatically from where they were.

Mr. Brantley used the opportunity to praise the work done during the construction period by mostly Nevisians at the island’s only five diamond-rated tourism facility.

“It is a fantastic new initiative that they have done there but the pool is nice and very nice. It is spectacular in fact but what for me is even more spectacular, it was built by a Nevisian.

“In fact the majority of work done at Four Seasons Resort in this last phase was done by artisan workers right here in Nevis – the landscaping, the irrigation, the masonry, the stone work was done by us, and I want you to go there and see for yourself because this is what the people of Nevis are capable of producing. So ladies and gentlemen it just tells you that we are moving. We are moving and we are moving in the right direction,” he said.

With detailed references of a chic, fashionable and stylized voice of the Caribbean spirit and soul, the new design features a lighter, cleaner and fresher décor, with light-drenched spaces that give off a sense of comfort and the ultimate feeling of being completely relaxed

On Pinney’s Beach on the small, unspoiled island of Nevis; minutes from museums, plantation homes and historic churches dating to the 1600s
10 minutes from the Nevis airport, or 15 minutes by boat from the St. Kitts airport

Number of Tennis Courts: 9
Tennis Lessons: For a fee

65-minute Nevisian Massage pays homage to local spices and herbs, blending them with exotic scents of West Indies; long, flowing strokes mimic the waves of the Caribbean Sea, easing the senses and recharging the mind and body.