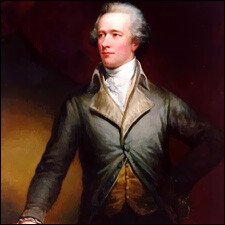 France has paid tribute to the Nevisian-born First Secretary of the United States, the Hon. Alexander Hamilton, whose mother was French, in its congratulatory message to St. Kitts and Nevis on the 26th Anniversary of Independence.

“In this period of international financial crisis, which underlines the inadequacy of regulatory mechanisms, the memory of a Nevisian, of French mother, Alexander Hamilton (1757-1804), aide-de-camp of George Washington and First Secretary at the Treasury, who was the primary instigator in the regulation of the financial market in the United States deserves special tribute,” said French President, His Excellency Nicholas Sarkozy in his message to Governor General of St. Kitts and Nevis, His Excellency Dr. Sir Cuthbert Sebastian.

President Sarkozy in expressing satisfaction that it was during the French Presidency of the European Union more than a year ago m that the EU-CARIFORUM Economic Partnership Agreement (EPA) was signed.

“This agreement offers a new impetus to the strengthening of political, economic and cooperation relations between our two regions,” said the French President.

Secretary General of the Organisation of American States (OAS), His Excellency Jose Miguel Insula in renewing his highest consideration to St. Kitts and Nevis Prime Minister Hon. Dr. Denzil L. Douglas expressed congratulations, cordial greetings and best wishes for the success of the Government and the prosperity of the people of St. Kitts and Nevis.

Director General of the Inter-American Institute for Cooperation (IICA), His Excellency Dr. Chelston Brathwaite in his message to Prime Minister Hon. Dr. Denzil L. Douglas reaffirmed IICA’s commitment to working closely with the Ministers of Agriculture, institutions and organisations linked to the agricultural sector to help them face the challenges affecting agriculture in the Hemisphere.

“Our objective is to turn those challenges into opportunities for improving the lives of the people in the rural areas of each of our 34 Member States, by providing a range of services to address national priorities,” said the IICA Director General.