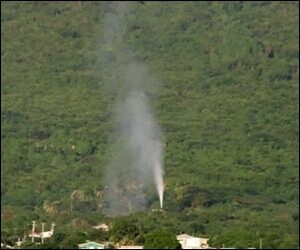 The St. Kitts – Nevis Government is of the view that geothermal energy can be the solution to the high cost of electricity generated from fossil fuel in the Federation.

Speaking on the Government’s weekly radio and television programme, “Working for You” on Wednesday, Minister of Public Infrastructure, Posts, Urban Development and Transport, the Honourable Ian Patches Liburd, recounted the words of the former St. Kitts and Nevis Leader that when he saw the electricity bill of an elderly person he wanted to cry. Minister Liburd said that “this statement really epitomizes the state of electricity in St. Kitts and Nevis.”

Minister Liburd indicated that it is the Government’s goal “that everyone should have access to electricity.”

“We believe that irrespective of your social status, everyone in the country, every citizen, should have access to electricity and affordable electricity,” he said.

The minister said that St. Kitts and Nevis is blessed with sunshine, wind and two volcanoes and that renewable energy is the way forward. He added that “the government believes that geothermal is the way to go.”

He said that a Memorandum of Understanding (MOU) has been signed by the Government and Teranov, a French engineering and services company. The MOU was signed on September 04, 2015, in Guadeloupe and according to Minister Liburd, this is indicative that the Government has “already established the road map” to develop geothermal energy on St. Kitts on an industrial scale.

He also said that there is an exploration team on St. Kitts which arrived about three to four weeks ago. There is a geophysicist, geo-chemist and geologist and he indicated that by March of 2016, “we will be able to establish, having done the assessments, if there is a geothermal resource on St. Kitts.”

According to Minister Liburd, “all early assessments by Teranov would be of no cost to the Government.”