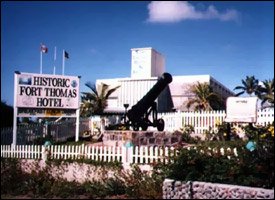 A German company is expected to re-develop the former Fort Thomas Hotel property into a Radisson brand.

Minister of State for Information, Sen. the Hon. Nigel Carty said the Cabinet several months ago had considered three proposals for the purchase and re-development of the Fort Thomas Hotel, but upon examination, Cabinet gave approval in principle to an American-based investment group, North Star, to pursue its proposal.

“To date, North Star has not met all the requirements set out by government for the full acquisition of the Fort Thomas Hotel property,” said Minister Carty.

He said that during this week’s Cabinet meeting, a fourth proposal by a German developer was considered and was approved in principle.