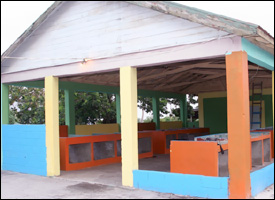 The Gingerland Market Receives A Facelift

There is a new look to the Gingerland Public Market as splashes of festive colours; orange, turquoise, green and yellow, adorn the building’s columns and stalls making it a major attraction for persons travelling in the Gingerland area.

The market’s rehabilitation resulted from an onsite fundraising activity held by the Gingerland Agro-Tourism Project (GATPRO) and the UNESCO Youth Path of Nevis where it was then decided that the once popular market still had lots to offer the Gingerland community and the Nevisian public by extension.

Tourism Officer within the Ministry of Tourism on Nevis, Ms. Vanessa Webbe, in a post cleanup interview with the Department of Information [DOI] on Monday [Oct. 18], said she was proud of the work that had been done by UNESCO Youth Path’s 15 active members, who for weeks, gathered at the venue to prepare it for opening day.

“The members of the group are inviting the community to come out on a Saturday with your provisions, your household items; whatever it is you want to sell. We want to create a sort of a flea market-type atmosphere right here at the Gingerland Public Market,” Webbe told DOI as she looked in amazement at the work that had been done.

Because the Gingerland Public Market is expected to provide “worthwhile self employment opportunities,” persons interested in managing a stall could contact Ms. Vanessa Webbe at the Ministry of Tourism or Mr. Eric Evelyn at the Department of Agriculture.

“We hope persons can come up with profitable businesses, however small. They can start small and grow,” Webbe said.

In an effort to encourage young entrepreneurship, the UNESCO Youth Path group, with persons aged 15 to 25, will manage a snackette at the site.

Ms. Webbe said she was grateful to the Japanese government who, through UNESCO, were able to fund the project which allowed members of the group to be trained in cultural heritage tourism, particularly as tour guides.

“We want to invite the general public to come and make use of this facility. It is for you, the people, and also we want to ask you to support the youth in their endeavours as they try to start their own business,” she said.

She added that once the Gingerland Public Market was officially opened, the site would be used to facilitate workshops and future training for the UNESCO Youth Path group.

A number of businesses and individuals, including the Honourable E. Robelto Hector, Dr. Kelvin Daley, Mr. Keithley Amory and Mr. Eric Evelyn of the Ministry and Department of Agriculture were commended for their instrumentality in the rehabilitation efforts.

In addition to the painting work done, two new toilets were installed at the market.