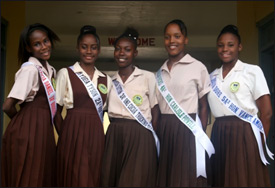 Students of the Gingerland Secondary School (GSS) on July 02, 2008 via NTV’s Channel 8, invited the Nevisian public to attend an anniversary pageant to mark the school’s 35th anniversary.

The pageant’s five contestants would represent each level at the school.  They are Ms. Clayticia Daniel of Form 1A1, Ms. Hydeia Tyson of Form 2A2, Ms. Shariesa Sutton of Form 3A1, Ms. Vikelia Hicks of Form 4A2 and Ms. Deslyn Dore of Form 5A2.

The school’s Juniour Achievers of Form 4A2 are the organisers of the pageant.

According to the Chairperson of the anniversary show committee and Juniour Achiever Rondee Pinney, the public could expect an exciting show.

“We have five beautiful contestants, I promise you that.  It won’t be boring or drawn out.  It will be very entertaining and classy,” Ms. Pinney also a student of GSS said.

The contestants are expected to make appearances in Introductory Speech, Talent and Creative Caribbean Formal Wear.

The show would be held at the Gingerland Primary School and would take place on Saturday July 12, 2008 from 7:00 PM.

Businesses F and F Transportation Services, One Coco Trucking Services and Boddie’s Construction along with Hon. Carlisle Powell were among those who offered their support as sponsors of the pageant.