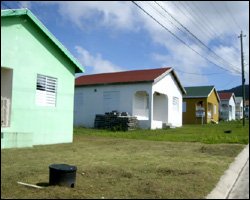 The Federal Government in St. Kitts and Nevis is adopting a progressive, people-empowering policy designed to boost home ownership and property ownership, which will in the medium to long term boost overall economic development of the country and improve the quality of life of the local people.

The Cabinet at its recent meeting, concluded after several months of evaluating government’s land distribution policies, there was a need to further improve the efficiency and effectiveness of land distribution programmes on three fronts by selling land at a more affordable rate for all first-time land owners, improving the rate of land allocation and expediting movement from land ownership to home ownership.

“In respect of making land more affordable, Cabinet approved a policy that reduces the price of land to $2.95 per square foot for the first 4000 square feet, with additional quantities of land attracting a market correlated value established for government land. Cabinet is very strongly of the view that every citizen deserves to own a decent plot of residential land at a very affordable rate, while at the same time considering that government will be called upon to install infrastructure for roads, water, electricity and other services,” the post-Cabinet statement said.

Just over 1,000 lots have been distributed over the last 18 months under the Special Land Distribution Initiative (SLDI).

Despite this level of success, government has seen the need to further expedite land distribution, and has approved the installation of a Lands Sales Agency (LSA) to be located at the offices of the Privatisation Unit at Bladens Commercial Development.

“The LSA will ensure that there is rapid transparent distribution of land to all local applicants. The LSA will have an organizational structure that has dedicated engagement of land surveyors, a legal unit, the Land Registry at the Court, and the Inland Revenue Department,” said the statement.

On the matter of expediting homeownership, the St. Kitts-Nevis Labour Party Cabinet under the chairmanship of Prime Minister Hon. Dr. Denzil L. Douglas approved a policy that waives payment on the allocated lot for a period of two years, while creating a special instrument to allow the land owner to proceed to engage a financial institution.

“The payment waiver policy allows the new landowners to begin to accumulate their personal finances to contribute towards a down payment on the mortgages for their homes, instead of having to consume those resources in land payments,” said the post-Cabinet briefing.