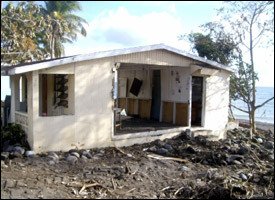 The Government of St. Kitts and Nevis has moved quickly to re”“settle 25 families on the western coastline whose homes were destroyed or permanently damaged by Hurricane Omar on October 16.

A ground breaking ceremony for the first phase of the re”“settlement programme is planned for Monday afternoon at 3 p.m. at the Con Phipps Housing Project.

Co”“ordinator of the National Emergency Management Agency (NEMA), Mr. Carl Herbert, who heads the Hurricane Omar Resettlement Task Force, said 12 one, two and three”“bedroom homes will be constructed for 12 families in phase one.

He said that four homes will be built at Con Phipps in Half Way Tree and eight at Wingfield, in Old Road for the families from Half Way Tree, Verchild’s and Old Road.

The re”“settlement programme, which is jointly financed by the Governments of St. Kitts and Nevis and the Republic of China on Taiwan, will see each home constructed on 4,000 square feet of land provided by the local government.

The homes will cost between EC$85,000 and EC$140,000 and allocated according to the current household.

During Monday afternoon’s ceremony, Resident Ambassador of the Republic of China on Taiwan to Sy. Kitts and Nevis, His Excellency Rong-Chuan Wu will hand over a cheque to Prime Minister Douglas to assist in the financing of the re”“settlement programme.