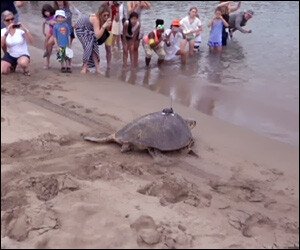 Millie, the latest Hawksbill sea turtle tagged with a satellite tracking device on Nevis by a collaborative group of turtle conservationists, was released into the Caribbean Sea on July 13, 2015, hours after she was found nesting on Oualie Beach.

The event was the 9th collaborative event by the Sea Turtle Conservancy based in the United States of America in partnership with the Four Seasons Resort, Nevis and the Nevis Turtle Group. Millie will join a number of other turtles tagged on Nevis, whose movements are being monitored online via satellite.

Executive Director of the Conservancy David Godfrey said, every year they join with the parties on Nevis to preserve the turtles because of the pivotal role they play in the marine environment.

He reminded those who were gathered to witness the release, that they could monitor Millie’s movement on the internet over the course of the next year along with that of a dozen other turtles that they were tracking from all over the Caribbean and Florida.

According to Godfrey, the event was part of an education drive to raise awareness about sea turtles not only from Nevis but from over the places in North America and the Caribbean where they nest. In that way, people can begin to understand some of the threats the turtles face and the role they play in the environment.

He was hopeful that they could begin to teach everyone that sea turtles are worth far more alive than dead.

Head of the Nevis Turtle Group Lemuel Pemberton in brief remarks said, his group has been involved in turtle conservation since 2001. They have since encountered over 300 turtles on the beaches of Nevis, most of which they tagged and released. However, Millie was the largest Hawksbill turtle that they had encountered to date.

He used the opportunity to single out three young persons, who he said continue to serve the organization voluntarily.

“We have Jevaunito Huggins, he is the longest serving volunteer. Then we have Jaleel, his brother and we have Stedroy Sturge. He came on board the last and without them we would have a lot more difficulty,” he said.

Meantime, Permanent Secretary in the Ministry of Agriculture and Fisheries Eric Evelyn who spoke on behalf of Hon. Alexis Jeffers said, the Ministry was big on conservation and they were pleased that various groups had taken up the mantle to preserve turtles in Nevis’ marine environment.

“Congratulations on behalf of the Ministry of Agriculture and Fisheries all of the collaborating partners the Sea Turtle Conservancy, the Nevis Turtle Group as well as the prestigious Four Seasons Resort,” he said.

Among those present was Chief Executive Officer of the Nevis Tourism Authority Greg Phillip. The event was chaired by Director of Recreation at the Four Seasons Resort, Nevis Mackie France.