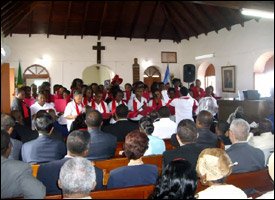 Persons affected by the recent passage of Hurricane Omar were remembered Sunday at a Service of Thanksgiving to mark the anniversary of the ruling Labour Party’s re-election to office in 2004.

“We thank God today for His mercies and sparing our lives, especially the lives of the people of New Guinea, Half Way Tree, Godwin Ghaut, Conyers, Middle Island, Lamberts, Verchilds, Old Road, Challengers, Palmetto Point and Trinity and those in Nevis on our western coastline that felt the surging waves and gusty winds of Hurricane Omar,” said Prime Minister and National Political Leader of the St. Kitts-Nevis Labour Party Hon. Dr. Denzil L. Douglas, in brief remarks during the service at the Half Way Tree Methodist Church.

The two and a half hour service began with Rev. Joyce Rohan accepting the National and Church flags. The National Anthem was sung by Ms. Yvonne Lawrence and the Introit by the Half Way Tree Methodist Choir with Mrs. Eugenia Johnson at the organ.

The Old Testament was read by Brother Glen Phillip, the Epistle by Sister Raedawn Thomas and the Gospel by Methodist Minister, Reverend Joyce Rohan.