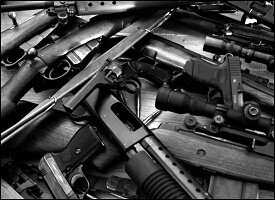 Illegal Weapons In The Caribbean

“And they pose a serious threat to the stability of his or her country,” says Dr. Douglas during his weekly radio programme on Tuesday.

Dr. Douglas said that as Chairman of the Caribbean Heads of Government over the next six months the trafficking of small arms in the region will be a matter for discussion and noted that the use of guns in the settlement of scores in recent years is alarming.

“This never, ever used to be the Caribbean way. But now, gang tensions, drug-related conflicts, and other forms of hostility are leading to this ugly and unacceptable conclusion. And so, CARICOM is taking this on frontally by pushing forward to break the illicit trade in small arms and weapons throughout the region,” said the Prime Minister.

He said this will not be either simple or easy.

“But we are resolute. And we are empowering both national and regional security forces with enhanced border patrol, forensic, and intelligence gathering tools to confront the organized crime elements that spread these deadly weapons,” Dr. Douglas said.

He said Caribbean Governments are also moving to bring the laws of the countries into synch with each other, so as to prevent criminal elements from being able to transfer illegal weapons from one Caricom country to another.

Dr. Douglas said anyone who has information about any such possession, distribution, or sale of firearms has an obligation to let the authorities know ““ whether anonymously or not.

“Whenever there is a shooting, and whenever there is a killing, if the gun was not licensed, that is clear evidence that some person or persons within the Federation colluded to bring that instrument of death into the country, and into the region, without the knowledge of the authorities,” said Dr. Douglas.

“These acts, along with the acts of those who grow drugs, or who import drugs into the region, undermine and undercut the positive efforts of the overwhelming majority of law-abiding Caribbean nationals who try so hard, day after day, and year after year, to stay on the straight and narrow. None of us in the Caribbean can afford to look the other way when someone we know is involved in these activities. As sure as the day is long, precisely those illegal weapons or those illegal narcotics that are not reported to the authorities will, in all likelihood, one day claim either the person who looked the other way, or someone that person holds dear,” said the Prime Minister.

He expressed CARICOM’s determination to confront the spread of illegal firearms throughout the region was a major focus of CARICOM s recently concluded meeting.

He said not only does every Caribbean national need to know this, but they need to ensure that if ever and whenever they have information pertaining to the presence of illegal drugs and illegal weapons they have a pressing and urgent obligation to ensure that, one way or the other ““ and providing it anonymously is fine –  information gets to the relevant authorities.