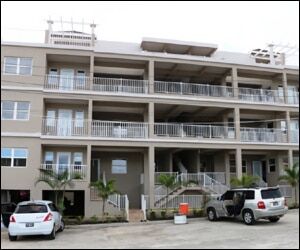 St. Kitts and Nevis welcomes the addition of 86 one bedroom condominium units to its hotel stock as the Imperial Bay Beach and Golf Residences at Half Moon Bay in St. Kitts is anticipated to open in April 2016.

Prime Minister, Dr. the Honourable Timothy Harris, along with the Honourable Ian Patches Liburd, Minister of Public Infrastructure, toured the facility on Tuesday, March 01, where they were briefed on the work done. Faron Lawrence, Project Manager, noted that the project is “essentially finished”, however, they are awaiting the arrival of furniture and appliances.

Minister Liburd commended everyone who played an integral role in the Imperial Bay Project and stated that the quality of the product and the local labor speak volume to the quality of skills present in St. Kitts and Nevis.

“As a matter of fact, the amount of construction that is ongoing here speaks to the contribution that this Imperial Bay Project will continue to make after substantial completion because it goes into the next phase in terms of another level of employment,” said the minister of public infrastructure. “Once jobs are created then we have economic growth and that is very important to our Government, as a Government which is hell bent on stimulating economic growth.”

He noted that once there is economic growth, jobs will continue to be created, thus allowing the economy to roll over.

Prime Minister Harris praised developments such as the Imperial Bay Project and noted that they are great investments that create job opportunities.

“We are quite satisfied that this particular project would add value to the residential community in St. Kitts and Nevis,” said Prime Minister Harris. “We are please to see a number of workers and sub-contractors on site. “These projects bring jobs, not only during construction, but subsequent to construction in providing a range of ancillary support services.

“We are also looking at the added value to the quality of labor that can come from engagement in projects like these,” said Dr. Harris. “The experience which our workers would have as they move from one project to another in the country means that we will have within,  the kind of skill sets that are required to sustain construction activity over a lengthy period.”

Dr. Harris noted that the Government will continue to support these projects, and welcome all investors, as it is an investment-friendly Government.

Construction on the Imperial Bay Project commenced in March 2013. It is comprised of six buildings with 86 one bedroom condominium units; a common area, comprised of an office and leisure room; and a common swimming pool topped off with a beautiful landscape.