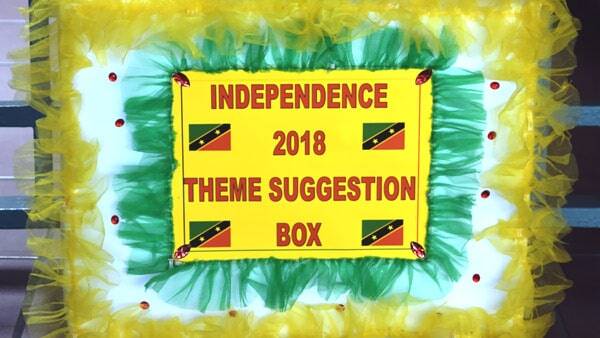 A call is going out for submissions for the official theme for the 35th Anniversary of Independence of St. Kitts and Nevis. Against this backdrop, citizens and residents alike are encouraged to tap into their creative minds.

The theme competition was officially launched by William V. Hodge, Permanent Secretary in the Ministry of Education and Chairman of the Education Sub-Committee for Independence, on Monday, April 16, who noted that the deadline for submission of entries is Wednesday, May 02, 2018.

He added that late entries would not be acknowledged or considered. All entries must be submitted in writing and sent via email, postal mail or placed in a drop box at the entrance of Government Headquarters located on Church Street in Basseterre, or the administrative building of the Ministry of Education located on the third floor of the Cable Building. Entries can also be dropped off at the headquarters of the Nevis Island Administration (NIA) in Charlestown.

The chairman shared the guidelines for the theme competition so as to give participants a better understanding, and encouraged them to pay attention to the criteria to ensure that they meet eligibility requirements.

“The theme must be concise, memorable and certainly no longer than a sentence. Composers should aim for no more than six to eight words. The theme should focus on patriotism and love of country. An internal rhyme scheme and rhythm will enhance the theme or the slogan,” said Mr. Hodge. “The theme should accurately reflect the country’s realities on the ground and common shared future to which all citizens should reasonably aspire.”

Permanent Secretary Hodge said that the committee looks forward to receiving an abundance of submissions, especially from young people, as it is important for them to play a vital role in the country’s future development.

A maximum of two submissions are allowed per person, and every submission “must be new and original”, as old and plagiarized entries will result in immediate disqualification.

Entries can be emailed to william.hodge@moeskn.org, or independence.themeskn@gmail.com. If participants are using the postal service, entries must be addressed to the Permanent Secretary, Ministry of Education, 3rd Floor – Cable Building, New Street, Basseterre.

The 34th Independence Anniversary was celebrated under the theme “Youth, Vision, Integrity: Securing our Nation’s Prosperity,” and was won by Donnette Dyer-Maloney of Nevis.