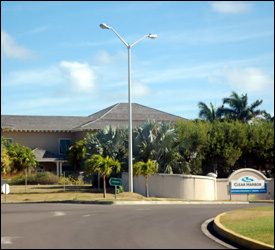 High Court Judge His Lordship Mr. Justice Errol Thomas has granted an Injunction against a US based internet cable company following its dismissal without warning of 131 workers last week.

Clear Harbour (Nevis) Ltd and several persons and financial institutions have been restrained from disposing, transferring, charging, dissipating, or diminishing or in any way howsoever dealing with any assets held in the names of the persons named in the Injunction.

An affidavit  filed by Labour Commissioner Mr. Spencer Amory claims that Clear Harbor Nevis Limited closed its operations terminating the employment of all its employees.

He said that he has been informed by the Social Security Board and verily believe the same to be true that on or around the 31st March 2011, Clear Harbor Nevis Limited paid some monies to satisfy its various obligations for Social Security and Employment benefits and that since the said payments there is still an outstanding balance of EC$2,192.15 for Severance Payments and EC$12,742.44 for Housing Levy.

“I am also informed by the Electricity Department of St. Kitts and verily believe the same to be true that Clear Harbor owes the amount of EC $344,175.20 for electricity and EC$15,876.80 for water for the period November 2009 to March 2011,” said the Labour Commisioner.

He also claims that Clear Harbor owes taxes to the Inland Revenue Department under the Income Tax Act.

Mr. Amory claims that at a meeting with officers from the Social Security Board with Messrs. Carlo Neil and Greg Payne, Attorney and Finance Manager for Clear Harbor respectively, both declined to give an undertaking that Clear Harbor will meet its financial obligations prior to leaving the Federation.

“In light of the foregoing, it is my belief that, unless restrained, the 1st to 12th Respondents/Intended Defendants would dispose and/ or transfer and/ or charge and/ or dissipate and/ or diminish their assets without satisfying their financial obligations to the Government of St. Kitts and Nevis.

Deputy Prime Minister and Minister of Labour, Hon. Sam Condor last week described the move by Clear Harbour (Nevis) Ltd to terminate the jobs of the employees as “callous, unprofessional and disrespectful” and closure its  operations in minutes constitutes a clear breach”  of the Protection of Employment Act and subsidiary legislation,” Condor told the St. Kitts and Nevis National Assembly.

He said then that “every legal option would be also explored in an effort to ensure that this matter is justly dealt with.”