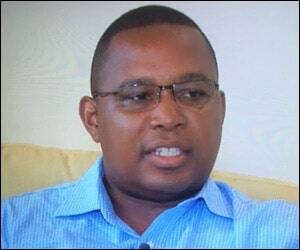 Edward Gift, Comptroller of the St. Kitts and Nevis Inland Revenue Department, said the future vision for the department is to see it become a model of “world class tax administration” in the excellent service that the department offers to its customers and the caliber of staff who provides that service in the next ten years.

Appearing on the Government’s weekly radio and television programme “Working for You” on Wednesday, April 13, Gift said of the department that: “We want to mold ourselves into a world class tax administration that is focused on achieving what we have in the department in terms of our mission statement.” He noted that the department’s aim is to encourage voluntary compliance of all the Federation’s citizens.

Gift said that the department is well on its way to achieving its goal.

“We have pockets of that emerging in terms of the activities that we do,” he said, while adding that St. Kitts and Nevis was the first in the Organization of Eastern Caribbean States (OECS) to offer E-services. “We were probably, based upon our research, among the top five in the Caribbean actually to offer E-services to our tax payers. We know we are one of the first in the Caribbean in terms of offering customer advisory visits to our customers who register for taxes.”

The comptroller noted that the department cannot function effectively without its employees and as such it is his hope to create an institution that caters to the workers as well.

We also want that to be a world class institution where the employees would love working at that institution in terms of benefits we provide and also the services that it has,” said Gift. “We have seen opportunities for that. We recognize a few of the other countries, for example Turks and Caicos, they are looking at setting up a proper tax administration Inland Revenue Department and they have identified St. Kitts and Nevis as one of the countries they want to visit.”

He noted that colleagues from the Inland Revenue Department in The Bahamas also visited the Federation as they recently introduced Value Added Tax (VAT). He said that other countries have shown interest in having professional attachment to St. Kitts and Nevis.

Gift said that the department is getting a great number of things done and done right and it is his hope for the department to be able to transform into a better organization that can serve the public and ensure that the Federation maintains the objectives of being a low cost jurisdiction when it comes to taxation. He said this can only be done if persons comply with the existing taxes on the books.

The comptroller stated that once everyone complies, things would come to fruition in the future. He is urging the general public to be responsible citizens and to pay their taxes on time as it will be beneficial to taxpayers.