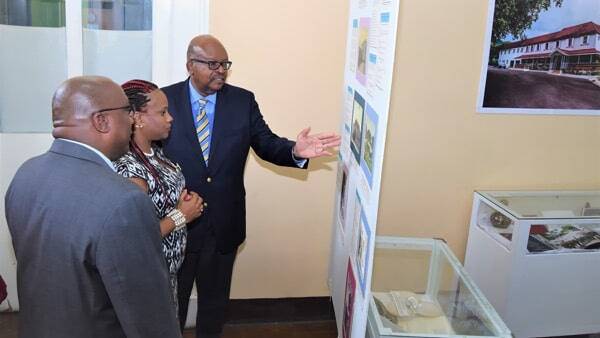 Monday, May 08, 2017, was a significant chapter in the history of the Federation of St. Kitts and Nevis with the official opening of the “Inside Government House” Exhibit at the National Museum in Basseterre.

“I am very pleased and honoured to be invited to be a patron of the National Trust,” said the Governor General, His Excellency Sir Tapley Seaton, as he delivered the feature address. He also mentioned that former Governor General, the late His Excellency Sir Cuthbert Sebastian, was named the first patron of the National Trust. “I am indeed honoured to succeed him in that position” Sir Tapley said.

“This exhibition, I think, is quite timely, because featuring “Inside Government House” gives some idea of what I sought to do when in 2015 I put together this leaflet which most of you have this morning. It was intended to show something and to document especially for the schools the question of the history of Government House and some of its occupants. I am privileged to be in that position at this present time and so I wanted to share with citizens and especially young citizens what Governor-General is all about,” he said.

The “Inside Government House” exhibit features gifts presented to the Office of the Governor General by officials from around the world. “There will be a national register of gifts”¦these objects presented to the Governor General were also presented for the benefit of the state,” said Sir Tapley. He noted that it is important not only for locals to come to the museum to learn about their history but for visitors as well to learn about the people and history of St. Kitts and Nevis.

The Governor-General emphasized the importance of having an exhibit for persons to learn more about the significance of Government House and the transitions it has gone through over the years. He also pointed out that Government House evolved from an Anglican Church Rectory into the official residence of the Governor General.

“Some things that you will see in the exhibit, beyond Government House, are significantly personal…,” said Sir Tapley, adding that the exhibit will have memorabilia from his childhood. He also said that he will be handing over invitation letters to the National Archives that were passed down from his father when his father served as a Federal Senator.

The Governor General thanked all in attendance for taking time out of their busy schedule to participate in such a momentous occasion, while declaring the exhibition open.

The “Inside Government House” exhibit is now officially open to the public at the National Museum, located in the old Treasury Building. The exhibit features gifts, news articles, photos and other memorabilia from the Governor General’s Office. The public is urged to make time to visit the exhibit before it closes at the end of July this year.