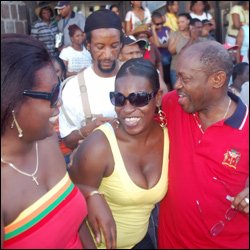 Thousands greeted the St. Kitts and Nevis Leader with best wishes for the Christmas/Carnival Season to renewing their support for his continued leadership in the upcoming general elections.

ZIZ News reported that the revelers came out, the weather was fine and the bands and Hifi systems rocked the centre of the city as the carnival activities continued with the Jouvert morning jam through the streets of Basseterre.

It was colour in galore and quite a spectacle for one to see as the various Jouvert troupes gyrated to the sounds of the 2009/2010 road march tunes and the individual mass players showed off their creativity to the many persons who lined the streets to get a good look at one of the major events on the carnival calendar.

The Security Forces were out in their numbers taking a zero tolerance approach to crime and violence especially in the jam session.

The big bands and Hi-Fi systems all tried to convince the revelers and spectators that their tune should be judged the road march for this carnival. The Grand Masters Band will no doubt try to make it three in a row while the Small Axe Band and Nu Vybes Band International will be trying to regain the title which they lost to the Grand Masters two years ago.

ZIZ Radio, ZIZ Television and ZIZOnline.com brought the action live from Fort Street, Basseterre as the Jouvert troupes and bands circled the area and as they passed the different judging points playing their popular road march tunes.

Ronnie Rascal’s Extreme Jungle Jouvert troupe and Nu Vybes Band International carried most of the crowd throughout the morning while calypso king of St. Kitts Konris joined Ronnie Rascal on the truck with his road march piece “Take the Oath.”

The attention now turns to the carnival shows and revelers will be looking forward to New Years day when the troupes and bands along with the folklore will be hitting the streets once again in an atmosphere of frenzy on New Year’s Day and Last Lap.