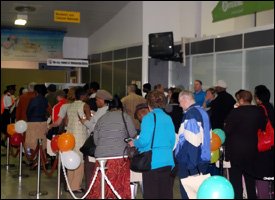 When British Airways (BA)  Inaugural flight from Gatwick Airport, London touched down at the R. L Bradshaw International Airport in St. Kitts on Saturday,  January 10, 2009 among those disembarking was Minister of Communications, Works, Public Utilities and Posts in the Nevis Island Administration, the Hon. Carlisle Powell.  In an exclusive interview with the Department of Information on Monday January 12, at his Charlestown office Minister Powell commented on how the new service would impact the competitiveness of St. Kitts and Nevis as a tourism destination.

“”It says now to the very discerning traveler who has not been to St. Kitts and Nevis and is looking for a Caribbean destination/vacation that if you want to cut out the hassles of getting to your destination, you don’t have to now think that the plane will land in Antigua anyway so why go further, you don’t have to say well I can go direct to Barbados, Jamaica or St. Lucia.

“St. Kitts and Nevis will be able to say and to market and to promote that this is in many ways a direct flight into St. Kitts.  Once you get on board at Gatwick airport you don’t have to get off the flight in Antigua where the flight makes a brief stop, but you can go directly into St. Kitts. Then if you are going to Nevis you can get there quicker than if you have to wait in Antigua to wonder if your bags came and to see if you can catch the connecting flight to Nevis.  This to me, as a person who has traveled the route for the last 18 or 19 years or so is the most convenient flight that I have ever had between Nevis and Europe, he said.

Minister Powell said the new service was expected to make a difference for all of those persons visiting or returning home to the Federation since it meant that they would now  be able to get home quicker, easier and cheaper in many instances.

“For me, it was pure pleasure! Pure delight!  First of all in checking in at Gatwick, and looking on the board and seeing BA 2157 flying to St. Kitts that made a difference to me”

“As a matter of fact I had to stand up, look at the board a couple of times with Minister Cedric Liburd, and then say, Yes, that flight is going to land in St. Kitts,  we are going to be home, it makes a huge difference, the Minister exclaimed.

He also showered praise on several agencies and individuals who were in some way involved with arrangements for the introduction of the new service.

“Even in these very tight harsh economic times, the fact that the Federal Government has been able to attract a direct flight from Europe, from London to St. Kitts is a tremendous tribute to the efforts of Minister Ricky Skerritt and the Prime Minister [Denzil Douglas] and the people of the Federation of St. Kitts and Nevis.

In addition to praising the federal ministry of Tourism Officials Mr. Powell also commended the support of the staff of the Nevis Island Administration’s Ministry of Tourism in England, the British Airways staff at Gatwick, and on board the flight, the Nevis Tourism Authority and as well as the immigrations and customs on St. Kitts for expeditiously processing those persons whose final destination was Nevis. He also extended special praise to inter-island ferry service Captain of the Motor Vessel Caribe Queen.

“And I have to say congratulations and thank you very much to Captain Ingy of the Caribe Queen who delayed his final departure by more than an hour.  He was due to depart St. Kitts at 9 pm, the boat didn’t depart St Kitts until well after 10 to accommodate those persons who were travelling on to Nevis to make sure that they got here on Saturday night.

“I have to say again thank you to my good friend Captain Ingie of the MV Caribe Queen for making that very special effort to ensure that those persons who had been delayed in London England to be able to get to their final destination in Nevis,” the Minister said.