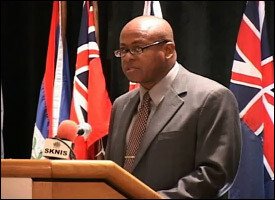 A top financial official in the Nevis Island Administration (NIA) has given his opinion of the economic forecast of the Caribbean territories, with regards to the ongoing global financial turmoil.

Financial Secretary in the Ministry of Finance of the NIA, Laurie Lawrence said the “spill over” from the global crisis had brought to the fore the interconnectivity of the world markets.

Mr. Lawrence was the chairman for the 15th ministerial meeting of the Caribbean Financial Action Task Force (CFATF), held at the Marriott Beach Resort on St. Kitts on November 21, 2008.

He pointed out that financial stakeholders were led to a greater understanding of its shared responsibilities and obligations in all of the critical areas which impacted on the economic prosperity and national security of the Caribbean.  Mr. Lawrence further stated that OECD countries could not solve this problem alone and called for the adoption a serious approach.

“In fact, negative growth is projected for many of the OECD countries in 2009 and as a result the emerging economies are expected to drive world economic output in spite of their own economic difficulties”.

“The emerging economies will therefore have to sit at the tables with their bigger brothers to bring stability to the financial system and to revitalize the global economy”.

A similar approach will have to be adopted if we are serious about tackling the national transnational crimes.  We cannot solve these problems by ourselves we must solve them together,” Mr. Lawrence said.

On behalf of the Federation of St. Kitts Nevis, Mr. Lawrence re-instated the commitment to the ideals and objectives of the organization and reviewed some of the matters deliberated on at the meeting.
“We [FATF] will continue to play a critical role in enhancing within the Caribbean basin, compliance with the FATF’s 40 recommendations and the nine special recommendations through the mutual evaluation program, being an effective voice in the Financial Action Task Force through our newly gained status of associated membership and promoting greater corporation with our important external partners in the area of technical assistance and training,” Lawrence said.

The Caribbean Financial Action Task Force is a body of 30 states of the Caribbean, which have a common agreement on counter measures to address criminal money laundering and the financing of terrorism.  The CFATF was established in 1992.

The chairman, requested a minute silence for the late chairman, Mr. Roland Weaver of Aruba and for the children who died in Haiti during the collapsed school building.