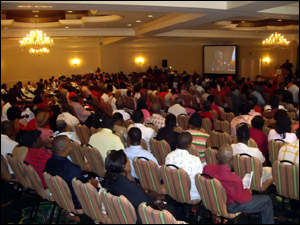 He recently told the 76th Annual Conference of his governing St. Kitts – Nevis Labour Party that the wheels of change have been turning since the Party assumed office in 1995.

“They have propelled St. Kitts and Nevis to the higher echelons of the United Nations Human Development Index. Today I stand tall and you can stand tall and beat your chest,” said Prime Minister Douglas.

He said the Labour Party Administration has been transforming the St. Kitts and Nevis economy from a sugar mono-culture to a well diversified and integrated service-oriented economy.  “We are transporting our people to new vistas of opportunity and progress,” said Prime Minister Douglas, who warned of persons who would want to stop the wheels of progress.

“Do not be fooled I warn you, by those who would have you stop the wheels of change to attempt to start them again. They will only take you in the wrong direction. In these challenging times in which we find ourselves, the major ingredient required to keep the wheels of change moving in the right direction is experienced and tested leadership,” said Prime Minister Douglas.

He added that the Labour Party continues to provide the Federation with that leadership and will “continue to fuel the change by adding to our leadership team, new persons with fresh ideas and with the ability to sharpen our focus on young people and on the women in our society.”

He said that the Saint Kitts – Nevis Labour Party is in good hands. “Our Federation continues to enjoy outstanding leadership. I urge you therefore to stick with Labour and complete the change,” said the Labour Party leader.