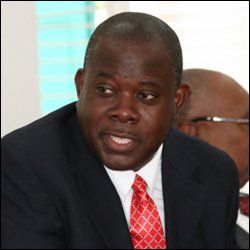 Robelto Hector In The Nevis Assembly

A Bill which cleared the way for the acquisition of the cable communications system currently being operated by the Cable and other interests associated with the system was passed into law at a sitting of the Nevis Island Assembly on Monday.

The Nevis Cable Communications Corporation Bill, 2009, which was tabled by Communications Minister on Nevis Hon. Robelto Hector, also makes provision for compensation to the Cable and also for related or incidental matters.

During his presentation, the Minister described the landmark legislation as one which represented empowerment for Nevisians but hastened to add, that the Nevis Island Administration was investor-friendly and was committed in its resolve to provide an enabling environment for investors.

Mr. Hector contended that the Bill ought not to have come as a surprise since in the agreement between the Cable Television of Nevis and the NIA dated May 12, 2003, provisions had been made for nationalisation under Section 12.

“I am reading from the Agreement “¦ In the event of the nationalisation of Cable by the Addministration Cable or its shareholders shall be paid at full market value for the cable television system by the Administration in a prompt manner. The full market value is to be assessed by an independent assessor in accordance with international accepted standards and procedure.

“The Agreement is clear and as I said this Bill ought not to come by surprise,” he said.

The Communications Minister pointed to a number of concerns with the existing cable on Nevis and noted that the NIA’s move to nationalise the cable company was not one of expropriation.

“Our act as an Administration today is not expropriation, as the Bill would have contemplated compensation for the assets. In fact as I outlined earlier, the agreement present between Caribbean Cable and the NIA gives great notice of what should occur in the event of Nationalisation,” he said.

The Minister said the NIA’s actions were in the best interest of the people of Nevis as it was duty bound to do. He said after 26 years he believed that any corporate body that had benefitted from high levels of concession would have benefitted tremendously and it was time for Nevisians to partake in that industry.

Mr. Hector outlined the new legislation and told the Assembly that it consisted of 40 Clauses. He said it was not the first time in the history of mankind that state ownership was contemplated in cable communications or related services and pointed to the dilemma faced by subscribers worldwide when monopoly driven organisations compromise subscribers’ ability to access service.

“Here in Nevis the NIA would like to be remembered as not a reactive government but as a trend setter, ensuring that our Cable and its related services are provided efficiently, at low rates and within a framework that allows participation of our citizens, rather than promoting the single motive of profiteering.

“There is no doubt that an efficient cable service, like other telecommunication services, can play a vital role in the socio-economic development of this country,” he said.