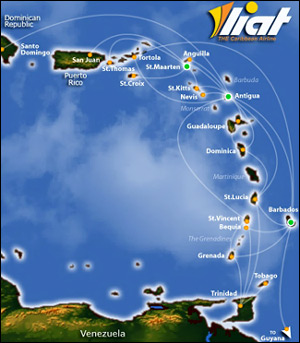 LIAT, the Caribbean airline is picking the slack in anticipation of the reduction of flights by American Eagle between St. Kitts’ Robert L. Bradshaw International Airport and Puerto Rico’s Munoz Marin International.

The Antigua-based carrier has announced a direct service to Puerto Rico leaving St. Kitts daily at 1:15 P.M and arriving in Puerto Rico at 2:25 P.M.

LIAT is also operating a morning flight from Puerto to St. Kitts via St. Maarten leaving San Juan at 10:50 A.M. and arriving in St. Kitts and 12:40 P.M.

An afternoon flight from Puerto Rico to St. Kitts via Antigua has the carrier leaving San Juan at 2:30 P.M. and arriving in St. Kitts at 5: 00 P.M.

In a press release from the company, Marketing Manager Derrick Frederick stated the new schedule is intended to offer greater flexibility to travellers for shopping and travelling during the summer.

The summer schedule change came into effect on 3 July.