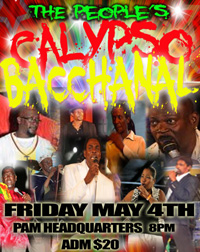 Dupont, who hosts the very popular WINN FM radio show the “Dupont Experience”, will be the special guest host at the much anticipated Calypso Bacchanal. Dupont will join another popular local MC and Calypsonian  Chris “Moonlight” Roberts aka the Mighty Short Pants. The combination of Dupont and Short Pants will certainly be an extremely entertaining hosting duo.

Dupont is no stranger to calypso having hosted numerous calypso shows and tents as well as being one of the artform’s biggest supporters. During the past carnival celebrations the benevolent businessman contributed a total of $5000 to a number of calypsonians including the king of the 2011 tents Rock-A-Fellah, The Unexpected, Mighty Rudder and the Mighty Crusoe who was a finalist in 1984 and 1987.

The show has been generating quite a bit of buzz since it’s staging was first announced last weekend. Some of the federation’s top calypsonians are expected to release brand new tunes for the event. Former National Carnival Calypso King Ayatollah along with former Culturama King I-Soursop in addition to the veteran Kinta, Magoo, Forrest are all expected to debut brand new songs. Also performing will be Rudder, Lord Kut,  former National and Independence King Phonsie, Lady Diva, 4 time National Carnival and Leeward Islands King Socrates and other well know calypsonians to be announced.

One of the organizers of the show also revealed that the show’s organizing committee is currently in negoatiations to book a special guest performer from overseas.

“The show has created quite a buzz and we have actually been approached by a very popular overseas calypso performer who actually expressed interest in performing on the show so we have begun to negotiate to see whether we can feature that performer,’ said one of the members of the show’s organizing committee.

Legends Band will be the house band for the evening.

The People’s Calypso Bacchanal takes place this Friday May 4th at the PAM Headquarters starting at 8:00pm.