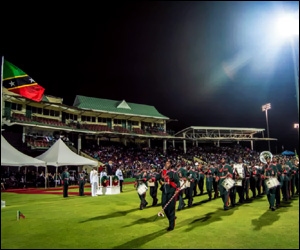 This year’s traditional Independence Ceremonial Parade had a magical feel as it took place under the lights on Thursday (September 18) at the Warner Park stadium – the first time in 31 years it was observed at night.

Thousands of residents braved early showers and packed the cricket stadium to witness the event which harkened back to the original Independence ceremony held on September 18, 1983. At the stroke of midnight on September 19, the national flag was raised for the first time while the national anthem was played by a local steel band. This year’s occasion however was punctuated by an impressive fireworks display in the early minutes of Independence Day.

St. Kitts and Nevis‘ Prime Minister the Right Honourable Dr. Denzil Douglas stressed that despite monumental challenges, the nation has grown from strength to strength over the past 31 years.

“We celebrate because we have emerged as one of the best performing economies in the Region and as a model of economic and social management, notwithstanding that we were the last of the English-speaking Caribbean states to attain independence and we are among the smallest nations of the world both in terms of [geographical] size and population,” he indicated.

To reinforce this point the Prime Minister highlighted the country’s debt to GDP ratio which stood close to 200 percent of GDP (Gross Domestic Product) a few years ago. That has now been reduced to 95 percent of GDP. Additionally, the Government’s “bank overdraft has been wiped out and our fiscal balance has been transformed from a deficit position to a very healthy surplus,” Prime Minister Douglas stressed.

Other achievements mentioned include the rate of economic growth which is the best in the OECS (Organization of Eastern Caribbean States) and among the highest in the Caribbean Region; the high literacy rate and access to secondary education as well as the impressive housing construction which has empowered thousands of residents.

“There is good reason for us to celebrate on the 31st Anniversary of Independence,” the Prime Minister emphasized.

In looking forward, several ongoing projects that will see a doubling of hotel rooms, the construction of second pier at the cruise ship facility Port Zante and the construction of a marina at Christophe Harbour is expected to significantly enhance the tourism sector. Constitutional reform was also cited as a matter that needs urgent attention in order to reflect the changing realities of the emerging society.

“In essence our nation is on the move, and we are well poised to make a gigantic leap forward in the creation of a new society, replete with opportunities for our people to realize their fullest potential and thereby achieve even the most demanding goals of personal and national development that they set themselves,” stated Prime Minister Douglas. “In this great march forward, we intend that none will be left behind. We shall embrace and include all of our people. Young people, women, men, the aged, the disabled, the worker, the entrepreneur and residents of other neighboring Caribbean countries and other countries who live among us and contribute to our development.”

A number of dignitaries from friendly countries came to Basseterre to share in the celebration including Britain, the European Union, France, India, Germany, Mexico, the Russian Federation, Japan, South Africa, Spain and the United States. They were joined by foreign diplomats based in St. Kitts including the Republic of China (Taiwan), the Bolivarian Republic of Venezuela, Cuba and Brazil.

The theme for the 31st Anniversary of Independence is “A Nation on the Move, Celebrating Our Progress.”