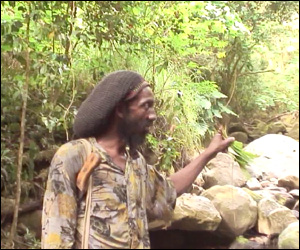 One of the proposed hiking trails located in the Cayon hills was given a test run by members of the Man and the Biosphere (MAB) Committee along with Cayon residents and representatives of the youth arm of the UNESCO National Commission, late last month.

Austin “Jay” Farier, Deputy Chairperson of the MAB Committee noted that St. Mary’s Biosphere Reserve had much to offer in terms of sustainable development.  The Keys Beach area has received much of the publicity but Mr. Farier made note of another critical element.

“We have a mountain component of the Biosphere Reserve which adds to the coastal component,” Mr. Farier emphasized.  “We wanted to see the biodiversity that needed protecting up here.  In this area you can see fish, lots of palms and ferns, fruit trees that elsewhere seem to be dying out, and beautiful heliconias.  There’s good potential for eco-tourism here.  The trail needs to be cleared and ropes added for comfort and safety ““ but once these are in place, in my opinion, it will be a really good trail.”

Dr. Kimberly Stewart, MAB Site Coordinator and Chairperson of the St. Kitts Sea Turtle Monitoring Network, mentioned that the area has much possibility.

“I think it has amazing potential,” Dr. Stewart exclaimed.  “I was really excited this morning to get up and see the fresh water fish species and crayfish living in the river.  We are always on the beach, so I’ve not seen any of these.  I think tourists would really be attracted to this hike and all of the natural fauna in the rain forest.”

The trail traversed a rock-covered area where two rivers in the Cayon Hills converge.  There were several trickles and pools of water between the rocks containing fallen foliage and wildlife such as crayfish.

Tour-guide and resident of the area Winston “Ebro” Caesar explained that the flow of water was from two sources.  One was the streams formed directly from rainfall and the other was streams of water coming from an aquifer that released water when there was a change in temperature.  Caesar also revealed that the area where the two rivers met was called Cornmeal and that before water from the rivers was harnessed in reservoirs, several persons had drowned in the 1960s in the once deep pools.  The Tour Guide also took hikers to an area which was called Congo Town and was said to be a former Maroon settlement in the 1800s.  He also pointed out several oil palm trees which were said to originate in West Africa and which bear fruit that is locally known as moko.

Another resident of the area Telca Wallace, who is also the Community Representative on the MAB Committee, revealed that the rivers once played a very important social function.  She noted that they not only provided drinking water but people also bathed and do their laundry in there.  The fruit trees in the area presented another element.

“When I saw a mango tree with ripe mangoes, I knew my energy problems were over,” Ms. Wallace jovially exclaimed.  “I had three.”

“When I was younger, I used to go these places [Cayon Hills],” Mr. Liburd reminisced.  “I have not been here in a while and to see that still exist it’s kind-a cool.  I want to invite visitors to swim, see the crayfish in the river, and eat that kind of mango, which is one of the sweetest I have ever eaten.”

Oureika Lennon expressed delight with the simple pleasures of the Cayon rainforest.

“Well, I had no clue about what to expect,” she gushed.  “I’ve never been to the Cayon mountain ““ but it’s real pretty, now I know why they call it Green Valley.”