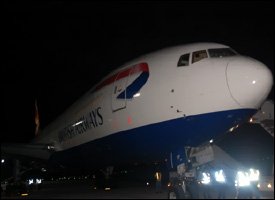 One hundred passengers, many of them nationals of the twin-island Federation, who reside in the United Kingdom disembarked from the flight, which earlier made a stop at the V. C. Bird International Airport in Antigua.

“We are happy to be here and that we did not have to change planes,” said a male passenger.

“Great to be returning. I am from here, but will be here for the next three months,” said a female passenger.

“St. Kitts is very beautiful from the air,” said another female passenger as she walked to the terminal from the 777 British Airways aircraft, parked on the newly constructed tarmac.

“This is very good weather, unlike the below zero temperature that we left behind. It is good to be home, I am happy,” said an elderly passenger.

Referring to the 100 passengers who came off the flight, British Airways Manager for United Kingdom and Global Sales (Corporate & Leisure) said it is encouraging.

“On the flight over, of the total capacity of the aircraft which is 280, excluding our group, 100 passengers were travelling right through to St. Kitts,” said Tams, adding: “For a first flight, that is very encouraging, very encouraging.”

The passengers were provided with a glass of rum or fruit punch on reaching the Arrivals Hall. The newly crowned Miss National Carnival Queen, Samantha Boone, presented tokens to the passengers to celebrate the event.