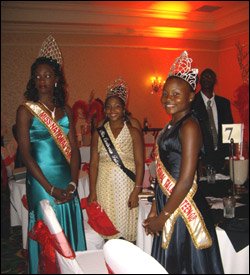 Former Speaker of the St. Kitts and Nevis National Assembly, Ms. Marcella Liburd is being lauded for advocating stronger family units as the theme for campaign in the upcoming general election.

The native-born lawyer was singled out not only for her dedicated service in successfully organising the annual Prime Minister’s New Year’s Gala now in its eight year.

“This is just a small measure of what Marcella can do as she continues to hold herself available for service to the people of St. Kitts and Nevis,” said the Federation’s Prime Minister Hon. Dr. Douglas in brief remarks at the annual event attended by nearly 600 patrons in the Grand Ball Room of the St. Kitts Marriott Resort and Royal Beach Casino.

Expressing his deep gratitude for the service of Ms. Liburd, Prime Minister Douglas noted that the former teacher and avid netballer has responded to the request of the residents of Central Basseterre to represent them in the St. Kitts and Nevis National Assembly in the next election.

“She comes to the Labour (Party) platform at a time when there is need to have a female Parliament and in the Government,” said Prime Minister Douglas, who is also the Political Leader of the governing St. Kitts-Nevis Labour Party.

“She is building her platform around the theme “˜Stronger Family Units = Safer Communities’,” said Prime Minister Douglas, who applauded her vision and foresight to nurture the need for family and community involvement in nurturing the upcoming generation.

The Featured Speaker was Prime Minister of Barbados, Hon. David Thompson, who at the end of his presentation received a gift from the newly-crowned Miss St. Kitts Samantha Boone, who also sang the National Anthem.

The Gala was graced with the presence of the Governor General, His Excellency Dr. Sir Cuthbert Sebastian; Deputy Prime Minister Hon. Sam Condor and Mrs. Condor; other Cabinet ministers and their wives; Deputy Premier of Nevis, Hon. Hensley Daniel and Mrs. Hensley; other Ministers in the Nevis Island Administration; Leader of the Opposition, Hon. Mark Brantley; Resident Judge, His Lordship Justice Francis Belle; former Junior Minister of Finance in the Federal Government, Mr. Richard Caines; business managers,  returning nationals and a wide cross section of the local community including King Dis and Dat.