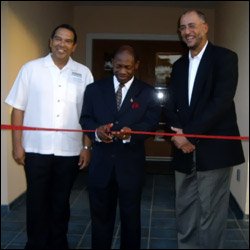 Speaking at a ribbon cutting ceremony for the official opening of 22 additional two-and three-bedroom villas on the same compound of the St. Kitts Marriott Resort and Royal Beach Casino, Prime Minister Douglas noted plans for the Marriott Vacation Club International include even further expansion on the site of the former Angelus Hotel.

“The trajectory, then, is good. The trend lines are as we would like them to be here in St. Kitts and Nevis. And this is reflective of the type of investment climate that my government has worked so very hard to maintain, and will continue to work to maintain, despite the very harsh realities now bedeviling global financial markets around us,” said Dr. Douglas, who is also Minister of Tourism.

He is of the view that opening of the 22 additional units will continue to impact in a very positive way, the lives of the people of St. Kitts and Nevis.

“I want you to reflect for a moment on the extra work that will be provided for our taxi operators, the extra work that will be provided for our tour operators, the enormous number of additional services that will be required of the vendors here in St. Kitts and Nevis and of course as we move in the next phase of the Marriott Vacation Club International, we expect positive impact on the construction industry which for the last 8 years has been one of the leading productive sector in the expansion and growth of the economy of St. Kitts and Nevis,” said Prime Minister Douglas.

He noted his first meeting with a group of Canadian businessmen, who had expressed an interest in investing in the Federation of St. Kitts and Nevis.

“It is not so long ago that this entire hotel complex, with all its facilities and all its features, was simply a thought”¦..it was an idea”¦..it was a dream. I remember my first occasion when I met a group of Canadian businessmen in Canada, who had all expressed an interest in investing in St. Kitts. I also recall a few years later, when we turned the sod for this complex to be built. At that time we wondered when it would have developed into the monument that it is today in representing tourism development in a significant way in St. Kitts and Nevis,” Dr. Douglas recalled.

He noted that over the years the complex has evolved and expanded along lines that can only be good – for both the investors and for the people of St. Kitts and Nevis generally.

Prime Minister Douglas said the St. Kitts Investment Promotion Agency was established to expedite the processing of investment proposals – while at the same time not compromising the essential thoroughness of the exercise.

“In addition to this, our target market, as far as tourism is concerned, is now, and will continue to be, the more discerning and sophisticated traveler.  The Marriot Vacation Club International is in keeping with both of these objectives, and so we welcome the growth and expansion of the Marriott’s St. Kitts Breach Club in St. Kitts, and have been pleased to be a part of the collaborative relationship that has made your growth and expansion possible,” he said.

The additional 22 units bring to 66, the number of villas out of the proposed 88 villas.