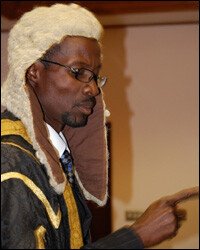 Speaker of the St. Kitts and Nevis National Assembly, the Hon. Curtis Martin has labeled as “mischief” a statement about his recent absence from the lawmaking body.

Mr. Martin,  may have reacting to a statement posted to the St. Kitts and Nevis List by former Editor of the People’s Action Movement (PAM)-owned Democrat newspaper, Mr. William Liburd.

Writing under the subject Absence of the Speaker, on Thursday November 5th 2009, Mr. Liburd using his Yahoo email account stated: “It has been brought to my attention that the Speaker of the National Assembly has been absent from the sitting today. Reports indicate that it is not an incidental absence, but a protest against the repeated late starting of the meetings of the National Assembly.”

Expressing thanks to the Deputy Speaker of the National Assembly and Member of Parliament for Nevis 11, the Hon. Patrice Nisbett for presiding over the two previous sittings of the lawmaking body, Speaker Martin made reference to “the usual style in St. Kitts, (where) people seem to make mischief out of situations.”

“I came across something (information) where people were saying that I did not attend the sitting because I was not happy with certain things. All I can say I settle on facts, not opinion. But I think that if we are going to move forward as a country, we need to be mature and honest with each other, because I had no such discussion with anybody. So to whom it may concern, please leave the Speaker out of your face,” said Speaker Martin.

Earlier, Deputy Prime Minister and Leader of Government Business in the lawmaking body, Hon. Sam Condor apologised to the Speaker and the general public for a two-hour delay in the start of the Assembly.

“I want to apologise to those on the other side as well as the general public for this delay. Mr. Speaker, there are a number of issues going forward in terms of the Parliament and we just wanted to make sure that we do things right and proper and do not infringe any rules and regulations. We thought that we wanted a little more time in order to iron out some matters and that is the reason for the delay. We want to apologise sincerely for that delay,” said Deputy Prime Minister Condor.

Three weeks ago, Speaker Martin threatened to remove the Political Leader of the People’s Action Movement (PAM), Mr. Lindsay Grant and two of his officers from the visitors’ gallery for disrespecting the lawmaking body.