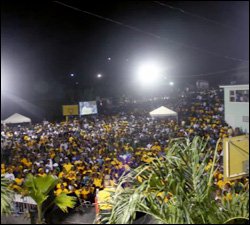 Young people came out in their numbers to support the People’ Action Movement’s youth rally which headlined the popular artist Vybz Kartel.  The PAM Party and the young people of PAM received added confirmation from the huge crowd when the Youth Manifesto dubbed, Young people are our future a New deal for the youth was launched.

A number of youths were seen anxiously trying to get copies of the 12 page document  which according to the Party’s Shadow Minister on Youth, Juni ” Scrape” Hodge is geared at ensuring complete and holistic growth and development of youths throughout the Federation.

The internationally known Addijah Palmer a.k.a Vybz Kartel had the crowd in a frenzy from the time he stepped unto the stage at about 10:45p.m as he belted out several of his hits.

Kartel told the crowd that he was grateful and thankful to the party’s Leader Lindsay Grant for affording him the opportunity to visit St. Kitts so as to encourage the youths to stay away from guns and crime.  Kartel added that he would like them all to unite so as to bring about development in the Federation.

Kartel interrupted his performance many times to give advice.  He told the young people in attendance that he feels that he can give advice pointing to his upbringing and the many challenges that he faced while growing up. He dismissed views that he and Movado are not on good terms declaring that the Gully and Gaza comments are just for musical entertainment.

Kartel known as the “Teacher” declared that the people of St. Kitts and Nevis are blessed to have an election with no election related violence urging them to disallow petty differences and issues to separate them.

Ã¢â‚¬Å“You have a beautiful country so I urge you not to destroy what you have because in Jamaica it’s different when it comes to election,Ã¢â‚¬ he said. A party official said that the show was geared primarily at helping to mould the minds of young people, adding that part of the party’s mandate is to promote wholesome and healthy lifestyle choices.

The show came to an end sometime after 1:00 a.m. with the appetite of supporters and fans fully wet with the numerous hits that Kartel had belted out during his hour odd long performance.

Kartel promised that he will return for a victory rally which the party will be holding on Tuesday January 26th after they would have declared it a public holiday in commemoration of the restoration of democracy, law and order by a PAM administration.