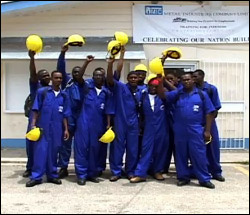 Minister of Social Transformation in the Nevis Island Administration (NIA) Hon. Hensley Daniel, in a televised interview on NTV’s Channel 8 on June 04, 2008, spoke of the importance of training on his return from a recent trip to Trinidad, where he met with residents of Nevis who were undergoing skills-training there, courtesy of the NIA.

Minister Daniel said the initiative by the Administration was part of its quest to promote and facilitate personal development of the people of Nevis.

“Education and training represent our first priority, our second priority and our third priority,” he said.

Mr. Daniel highlighted that such development could reap great benefits for the trainees and hoped that others would be encouraged to do the same.

According to the Minister, the team of 17, which consisted of 16 males and one female, were currently being trained in construction and its allied professions as well as in auto-mechanics.

“In discussions with them, they are very, very happy with the course that is being offered to them.  We have trainees in electrical engineering, training in masonry, carpentry and training in auto-mechanics and plumbing and all of these are critical skills needed to underlay the economic and social development of Nevis,” Minister Daniel said.

The training, which would last for three months, is being conducted by the Metal Industries Company Limited in Trinidad.

Meantime, the Minister, who also holds responsibility for Health in the NIA, spoke of his stop in St. Vincent in order to recruit nurses for Nevis.  While on there, Minister Daniel met with St. Vincent’s Minister of Health Hon. Dr. Douglas Slater.

“The purpose of the visit was to get some nurses to serve us here in Nevis.  We have a shortage of about 12 to 14 nurses at the hospital and we need him [St. Vincent Health Minister]  to get about five or six of them because they have a surplus.  According to the minister they have a surplus of some 95 nurses who are trained already but they can’t absorb all of them in the system and as a result they have offered them to the rest of the countries,” Minister Daniel said.

He spoke of the expense involved in recruiting overseas nurses and appealed to Nevisians to get involved in the nursing profession.

Minister Daniel also used the opportunity to inform the public that nursing was a noble profession, despite the idea that nurses were not paid large sums of money.