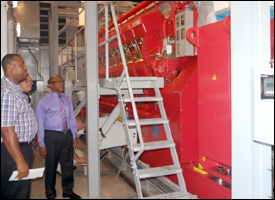 Two new Holeby electricity generators could be on line by the end of this month.

Minister of Public Works, Utilities and Energy, Dr. the Hon. Earl Asim Martin is confident that the multi-million dollar investment will lead to greater reliability and efficiency in the supply of electricity to consumers on St. Kitts.

Following a tour of the four MAN generating sets at the new power plant next to the existing Needsmust Power Station, Dr. Martin said the two of the generators will be commissioned by the end of next week and the other two by February 2011.

“That will definitely improve our capacity, provide a more reliable supply of electricity to our consumers and we expect this will lead to an overall improvement in the quality of life of the citizens and residents and also reduce the stress of our electricity workers who have been coping with varying problems over the past years,” said Minister Martin.

He said the over US$22 million investment in what is basically a new power plant is tremendous and would result in increased operational costs.

“We have spent millions of dollars in capital investment, which now has to be maintained with the hiring of additional staff,” said Minister Martin.

He said there will be strict adherence to the maintenance scheduled as stipulated by the manufacturers.

Managing Director for Carib Energy, Terry Burns said installation of the two engines that arrived in August has been completed.

“With the civil works completed ahead of their arrival, we have mounted the engines, completed the construction of the enclosures as well as install all the pipe work and electrical fittings,” said Mr. Burns.

With the commissioning engineers from the MAN factory on site as well as from the control system, preparation has begun to start the final commissioning and handover process.

“The first two engines will start to be operated in 48 hours and during next week, once everything goes according to plan and there are no glitches or problems, then these two Holeby electricity sets will be put into service by the end of the month,” said Mr. Burns.

He said the other two engines that arrived this month will go through the same process and are expected to be in service by the end of February next year.

Minister Martin expressed confidence that the staff has been adequately trained to maintain the new Holeby generating sets, pointing out that a management agreement exists between the Ministry and MAN ““ the manufacturers, since 2007.

“There has been extensive training programme with the maintenance staff to bring them up to a high level of efficiency over the past two year and as part of the continuous maintenance programme, the local staff assists the MAN engineers during overhaul.

“They work very closely with our staff and I think that that is the best way of learning on the job along with the internal classroom setting,” said Dr. Martin.

He used the opportunity to express thanks and appreciation to the consumers for their patience and understanding over the years as attempts were made to iron out the problems and find long-lasting solutions.

“I want to thank them, especially those who have been calling and enquiring about what was being done to improve the situation. I want to say thanks to all for their guidance during those trying times,” said Dr. Martin, who also extended thanks and appreciation to the employees for their perseverance.