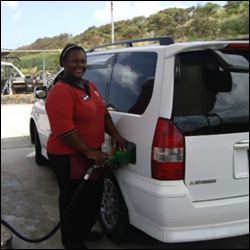 Filling Up With Gas In St. Kitts – Nevis
Photo By Erasmus Williams

The Monetary Council of the Eastern Caribbean Central Bank (ECCB) is recommending member governments formulate and implement a more targeted social protection interventions which would shield the vulnerable groups from elevated food and energy prices but protect the recent fiscal gains.

This was one of the recommendations that came out of the just concluded 62nd Council Meeting that received and noted a report on the status of inflation across the ECCU member countries, discussed the current policy responses of the member governments and assessed their effectiveness in addressing the issue.

The Council said that the primary source of the recent surge in inflationary pressures was high oil and other commodity prices, and that these were expected to remain elevated over the medium term.

The Council supported the view that there was a need to fine-tune the short-term measures and to place more emphasis on policy responses which would address supply and structural factors, cognisant of the need for member governments to balance social and fiscal responsibilities.

It also recommended the urgent development and implementation of regional energy and agricultural policies with the objective of making the region more resilient to adverse international price shocks.

The Council was of the view that the strengthening of the tripartite arrangement in respect of wages, prices and productivity, the OECS Competition Authority and consumer groups could assist in addressing matters related to the inflation issue.

It suggested the implementation of effective public education programmes to help households in mitigating some of the adverse effects of the elevated inflationary pressures on their budgets.

The Monetary Council also received a report on the findings from the recent work undertaken by the OECS Inflation Working Group (IWG) on methodological issues in the measurement of inflation.

It noted that the work sought to address the concerns raised with respect to the apparent divergence between anecdotal information from consumer experiences and the official Consumer Price Index (CPI) statistics.

The Council further noted that member countries were undertaking household expenditure surveys (HES) to gather information on spending patterns which would be used to update the consumer baskets utilised in the calculation of the CPIs.

Council agreed to promote a regional CPI revision project which would support the efforts of the national statistical offices in conducting the household expenditure surveys.

Secure formal agreement on how to address specific issues such as the structure and coding system of the new CPI to ensure consistency across member countries for comparative analysis, as well as for compilation of a regional CPI.

It was also agreed to commission a consultant to provide technical assistance in the processing of the returns from the household expenditure surveys (HES) and facilitate the work of the national statistical offices by enhancing their human resource capacity and by securing the necessary technology to facilitate the monthly calculation of the CPI.

The Monetary Council further agreed that national statistical offices should be encouraged to adopt international best practices so that the resultant CPIs would be reliable indicators of prices changes in which the public would have confidence.