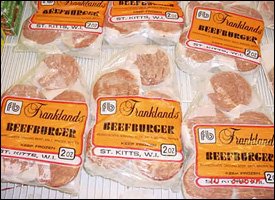 Increased purchases by local supermarkets resulted in a near 20 percent hike in beef production last year compared to the previous year, the Department of Agricultural said.

During the year the small ruminant sub-programme focused on the development of forage banks, improved fencing of farms and water harvesting.

“The increased beef production during 2008 was achieved mainly by increased purchases by supermarkets where they purchase local beef at a competitive price and the efforts to remove the animals from the South East Peninsula,” said Director of Agriculture, Mr. Ashton Stanley.

He said that the Department facilitated the sale of 51,427 kg of boneless beef to supermarkets and other processors, which were supplied by 64 farmers and recovered from 395 cattle.  The number of cattle that went into the boneless beef programme accounted for 58 percent of the total number of cattle slaughtered for 2008.  In addition, 7,103 kg of bone”“in beef were sold to the school feeding programme and was supplied by 18 farmers and produced from 52 cattle.

The Director of Agriculture disclosed that there is still a strong demand for local pork in the marketplace as is evident by the continued large number of pigs slaughtered despite the many challenges pork producers face particularly in relation to the high cost of imported concentrate feeds.

The Department facilitated the sale of 3,236 kilos of pork from 81 pigs to supermarkets in an effort to guarantee consumer satisfaction.

“Penetration of supermarkets with local pork continued to be a major objective of the pork sub-programme,” said Mr. Stanley.

He said that during October 2008, a volunteer pig production specialist was attached to the Department from the Agricultural Technical Mission of the Republic of China on Taiwan.

“The goal of the pigs sub-programme is to “increase the production of pork under improved systems of feeding and housing to enhance food safety requirements with an aim to penetrate the supermarket and hospitality sectors,” said the Director of Agriculture.

“The areas for collaboration include working on the development of proper breeding systems with a possibility of using artificial inseminations to improve the national gene pool.  In addition, efforts will be made to use available local materials to blend into a complete feed as an alternative to the costly imported feeds,” said Mr. Stanley.

During the reporting period, two water catchments were constructed on two cattle farm at Con Phipps and Godwin Estates.  The estimated capacity of each is 50,000 gallons and was constructed at an approximated cost of EC$30,000.